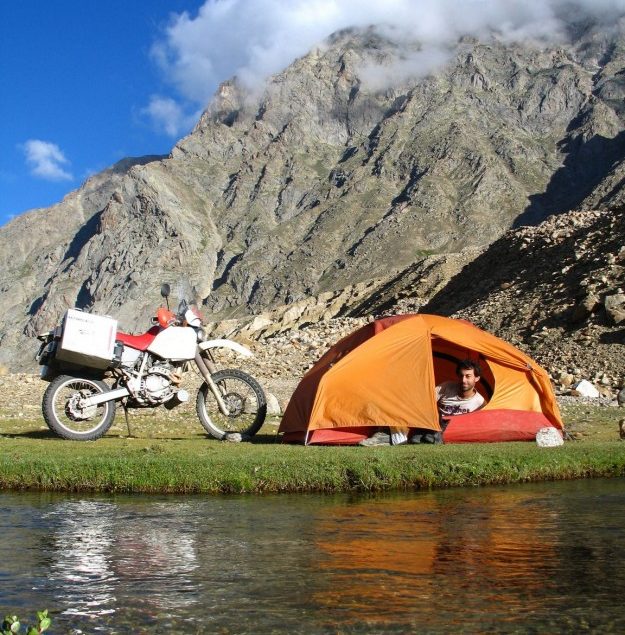 A bold traveler, a brave explorer, a dreamer. Elias Vrochidis is made of that intangible substance that does not fit into molds, is incompatible with everyday life, is not trapped at the borders of a country. On April 14, 2007, at the age of 23, he started a solo ride from Thessaloniki on a small motorcycle (Honda XR 250S) to travel to four countries in ten months: Urkia, Iran, Pakistan and India. Plans have changed many times along the way. His love for travel gave him wings. Today, the engine’s meter counts 200,000 km. Elias traveled, met and loved 58 countries in Asia and Africa. And that’s just the beginning.

Have you always been what we call a soul traveler?

Probably yes! Ever since I remembered myself, I have been dreaming of exploring the world in my own vehicle, in order to feel free and live the adventure.These pictures have fascinated me since I was a little kid. When I reached adulthood, I began to focus my efforts on making this dream come true. Since i was 21, I was preparing my first long trek in Asia and at 23 I was already out on the road!

First destination is Asia. How prepared were you for this trip and how much did it affect you as a character?

After two years of daily preparation, I can say that I was very well organized for such a mission and ready, psychologically, cognitively, and physically. I had read enough books on the culture of the people I would visit, had studied the diseases that would threaten these places, had taken first aid courses, worked tirelessly in a workshop to obtain some mechanical knowledge, and chosen me very carefully. I may not have a plan in my travels, as I like to be flexible, but good preparation has always been my ally and it has worked well when it came to difficult times, but mainly to avoid dangerous situations. At young age I was more or less the same as I am today. What has changed dramatically through my travels has been my worldview and the way I see things around me. I certainly got a much more global view of our world after seeing with my own eyes and experiencing the way people live in these countries. That made me grateful that I wasn’t born there and always remember where the wealth of our Western societies came from.

Next stop is Africa. What will you most vividly remember from the Black Epirus, which has been your home for 3 whole years?

When I summarize my three-year journey across the African continent, what comes to my mind is adventure and exploitation. There I lived the pure adventure I was looking for since i was a child in the wild. I wandered for days in remote areas, through dirt roads and trails, meeting friendly natives, who had barely changed their lifestyles in recent centuries and were sleeping under the stars listening to the night sounds of the jungle.On the other hand, what shocked me the most was the ruthless exploitation of Africans and this continent, which is one of the richest, if not the richest on earth. However, despite the unimaginable natural and mineral wealth, it has the poorest people, since all that wealth is exported to our own, thirsty for raw materials, societies. Unfortunately, what most certainly does not concern multinational companies commanding in Africa is to share some of that wealth in their local plant communities.

Have you ever been in real danger all these years?

No never. I encountered many difficult and severe difficulties. Of course, my motorcycle crashed, I got sick (though I never stayed in bed), I was threatened by police and military, who are the cruelest criminals, especially in the countries of West and Central Africa, I was robbed, hungry, thirsty. However, my life was never in danger. Probably the most stressful situation was when on the West Bank of Palestine I was armored by Israeli soldiers and screaming at unsavory Jews. But it was a simple misunderstanding, which was soon resolved. They had passed me for Palestine and treated me like they do everyday with the tortured Palestinians.

Probably the most stressful situation was when on the West Bank of Palestine I was armored by Israeli soldiers and screaming at unsavory Jews.

At the age of 23 you definitely have time to make such trips, but what about the economical part?

This is always one of the biggest difficulties in such an endeavor. My finances are poorer than those of the average Greek so it was not easy for me to travel. Although I have chosen to visit some of the cheapest countries in our world, I have always kept in mind that my wallet does not generate money. So my secret was not that I had a lot, but that I spent little. I almost never pay for a stay. When I was in nature, I camped freely, which is something I love. In the cities, I have usually been hosted by members of online hosting exchange clubs, to which I belong for many years (BeWelcome, CouchSurfing, etc.). So I limited my expenses on my diet, fuel and spare parts of my motorcycle, which is small and therefore economical. In Asia I needed just 354 euros a month on average, less than the average Greek needs at home! I managed to explore much more expensive Africa by spending 408 euros a month. Of course, I was always working during my travels to make a living. While traveling around Asia, I was writing for the Greek moto magazine, while in Africa I took a two-and-a-half-month break in the Democratic Republic of Congo to work in the Greek community restaurant.

If you were able to settle permanently in one of the countries you visited, what would it be?

You have written three books about your travels. Tell us a few words about them.

My first book, “27 Full Moon in the East”, describes my Asian journey. The corresponding album, “27 Full Moon in the East: Colors and Images,” describes the same journey through large-scale color photographs and small storyboards that accompany each image.My third and final book, “So I Travel”, is one that narrates my recent adventures in Africa and the Middle East. What is described in my books is based on my personal diary that I wrote every night during my travels.As I unfold the journey, I try to make the reader familiar to the culture, history, religion, problems, and joys of the societies I meet in order to understand and experience this transfer to another world more alive. All my books are available through my website: http://madnomad.gr

Are you ready for new trips? Where will you be next time?

Clearly, when I return to Greece, I get used to preparing my next mission. So I hope in a year or two I’ll be ready to go out on the road again, this time on the American continent. I intend to explore it all, from Alaska to Patagonia or the opposite, it doesn’t matter … It’s definitely a huge continent with great interest in every corner. So it may take me even longer than Africa!

How many travels does the soul crave? How many trips does a life fit? Pictures, flavors, smells, good and bad moments are deeply embedded in the memory. Lucky for those who travel. Blessed is Elias Vrochidis. Remember, “everyone’s destination is never a place, but a new perspective on things”.